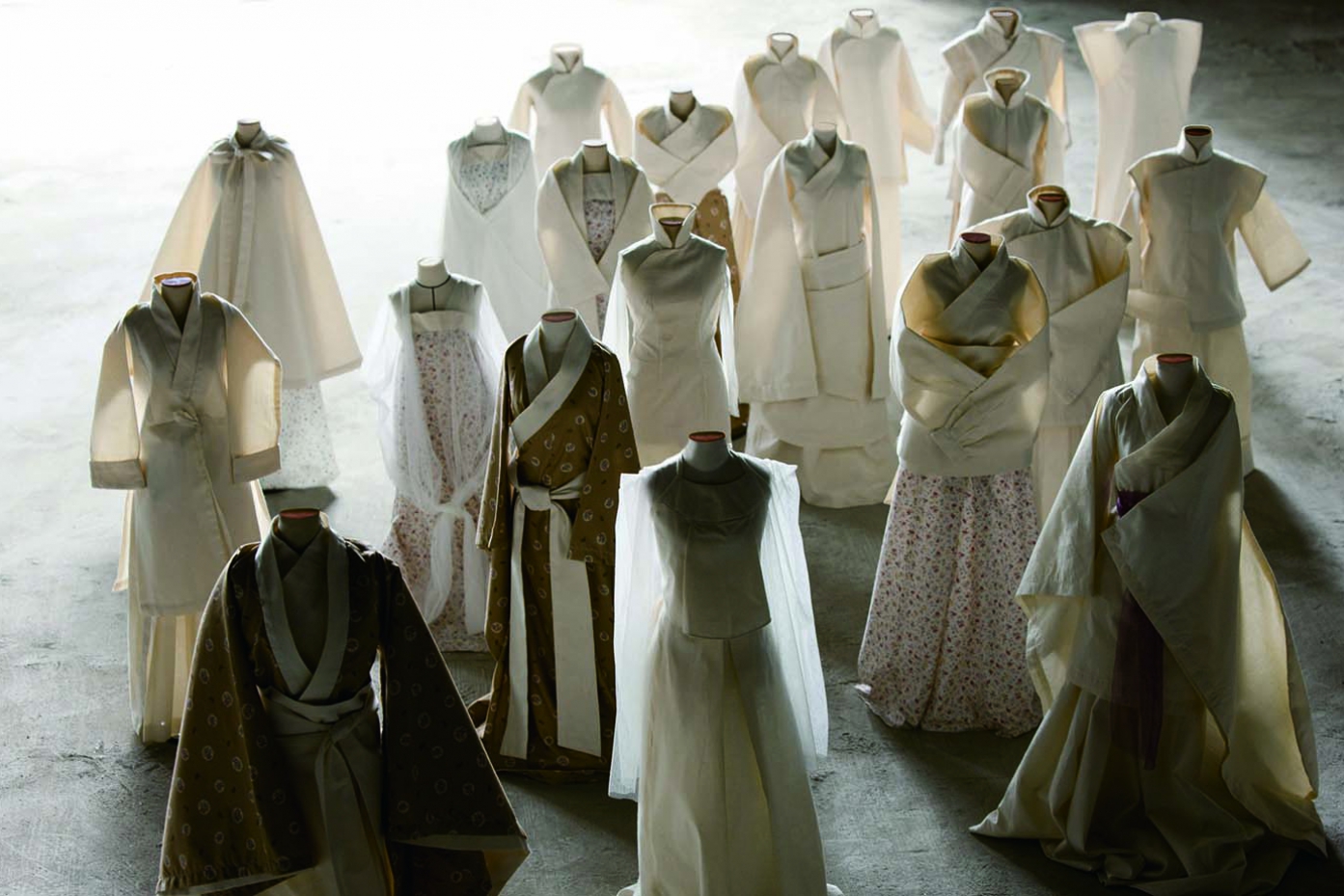 THE FIRST TIME I ever thought about the vessels that we use for our food and drink was while watching a Peking opera as a girl. I happened to notice that some of the performers were holding wine cups with three pointy stems.

A golden age for ceramics

PORCELAIN WAS FIRST DEVELOPED in China during the Eastern Han dynasty (25–220 CE). Some centuries later, this precious commodity had become so renowned that it was in demand around the world. The export was so closely identified with its country of origin that it became known overseas simply as ‘china’.

NOT MUCH IS KNOWN about women’s clothing in ancient China, except that they wore a large piece of fabric wrapped around the body, like a toga or a sari, from 770 to 221 BCE – the years that span the Spring and Autumn period and the Warring States period.

Reciprocity: the art of gift giving

Etiquette is very important in Chinese culture. As Confucius explained, treating others as you would like to be treated – reciprocity – is necessary for social harmony. So it disappoints me that, in these busy times, etiquette is becoming a lost art. One of the simplest ways to express regard for another is by giving a gift. It’s just important to make sure that this is done in the right way...

In Yilan, a seaside town outside Taipei, they produce a traditional fabric that features unrestrained floral designon a red background. I’ve loved this fabric since childhood.

A cake of flowers

In spring, when the local flowers are in bloom, the cherry tree at our house takes its time – it’s always among the last to awaken. The petals are a delicate pink on the tree, but after they fall, they’re pure white. Cherry trees bloom for just a few short weeks, which is why people cherish them so much. So, in tribute to the visual splendour they offer us each spring, I decided to design a floral arrangement to preserve them.

When most of the spring flowers have withered, the mountain butterflies near our house begin to bloom. These are Hydrangea angustipetala Hayata – narrow-petalled hydrangeas that produce white flowers that look just like butterflies. Occasionally, a few actual white butterflies will flit over these bushes, and we’ll be unable to distinguish between them and the flowers. 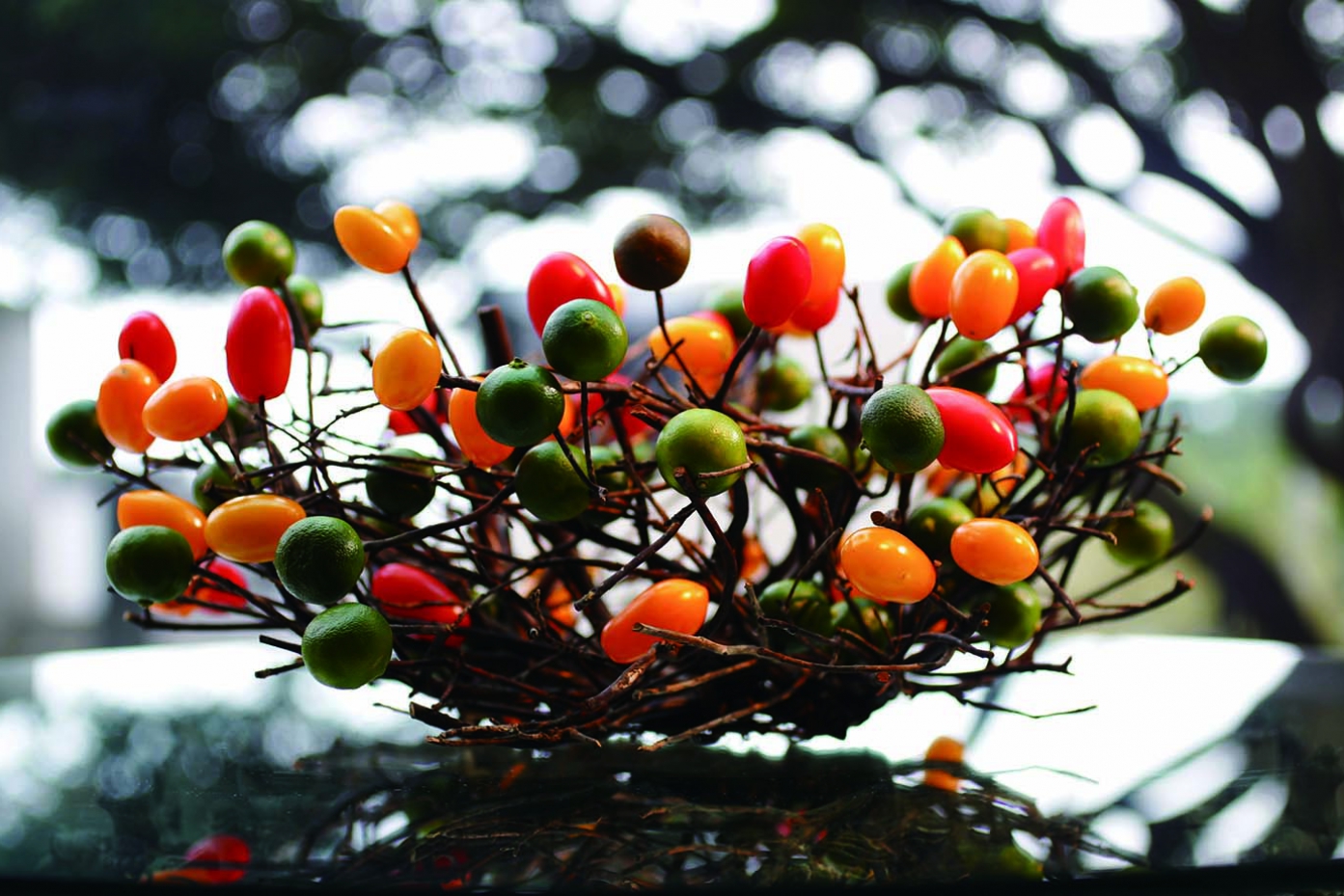 When the famous Chinese painter Zhang Daqian (Chang Dai-chien) moved to Taipei in 1976, having lived in California for many years, he built a house for himself in the Shilin District and called it the Abode of Maya. He died there in 1983, aged 84, and his ashes were buried in the garden, under a stone bearing the inscription ‘Plum Hill’.

The perspective of heritage

When I was growing up, we owned two Chinese landscape paintings, one at home and one at my father’s workplace. Though they were different, to me they looked just the same – same mountains, same clouds and water, same people.

THE FOUR GREAT BEAUTIES of history were Xi Shi, Wang Zhaojun, Diaochan and Yang Guifei – four Chinese women from different eras who became legendary on account of their great beauty.

A selection of accessories

WOMEN MAY HAVE their individual preferences, but they all yearn for beautiful things – like many other girls, I used to love drawing female figures, and adorning them with pretty accessories. My daughter loved her Barbie when she was young, but was always frustrated that Barbie had no accessories to go with her beautiful clothes, so I’d often draw them for her!

Recipes from the Kitchen of Friendship

When Stephanie (Liling), the daughter of theatre director Stan Lai (Lai Sheng-chuan) and his wife Nai-chu, got married some years ago, 30 friends held a bridal shower for her. It was my responsibility to create a gift for the guests, so I asked each of them to submit a family recipe, and a short blessing for the bride. I then compiled these into a book that I named Recipes from the Kitchen of Friendship.

This beautiful hand-dyed cloth was photographed at the Jin Ze Arts Centre in Shanghai.

The traditional outfit of Chinese commoners – a short jacket and loose trousers, made from a rich blue-dyed calico (also known as blue nankeen) – typifies the relaxed simplicity of times gone by.

My inspiration for these baskets came from a paper shop in Berkeley, California, where I purchased a bird made by an artist called Aimee Baldwin. Although they are fairly simple, it took me a few goes to get them looking just right.

When our company was designing the restaurant beside the Taipei Palace Museum, we produced lots of ideas for traditional-style window grilles. In the end, we went with a cracked-ice theme, but those discarded grille designs became my inspiration for a Dragon Boat Festival gift.

Summer is the time when we enjoy the most fragrant, sweet mangoes and red guavas. People also cut them into strips and dry them to create preserved fruits.

The Taiwan region is always plagued by lots of mosquitoes in the summer, which can be challenging if you want to leave food out in the open for any length of time.

I have a big tree in front of my house, and during summer typhoons it always loses some branches, so I like to salvage these and repurpose them as art materials 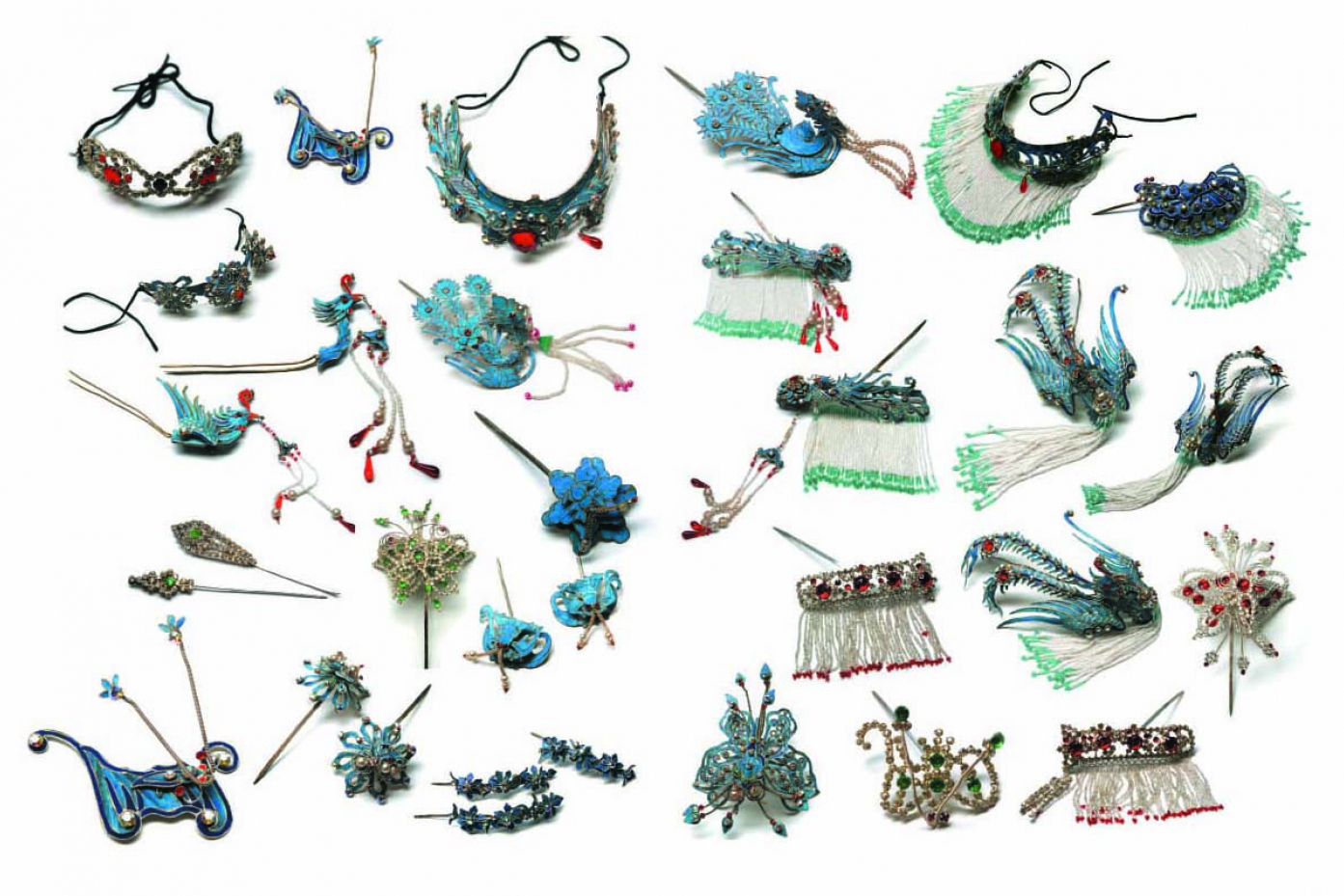 What better gift for the Moon Festival could there be than the itself?

These words from Su Shi’s poem ‘Shuidiao Getou’ (Prelude to Water Melody’; see page 43) were written to this younger brother Su Zhe , who was also a poet.

This quartet of bathroom gifts had a ‘moon’ at its very heart.

There is love to be found everywhere, which is why the romantic language of our classic poetry from the Tang dynasty still means so much to us today.

Both of these gift and their packaging were inspired by the colours of autumn, and were designed to be both practical and fun.

Every time I design a gift, I like to imagine how the receiver will use it, and keep using it – and this includes the packaging.

The best autumnal fruits in the Taiwan region are grapefruits, persimmons and pears.

Optical-grade acrylic can be expensive to work with, but it creates beautiful effects. So when a friend asked me to design a fundraising gift, I chose this material in order to create a valuable lamp. 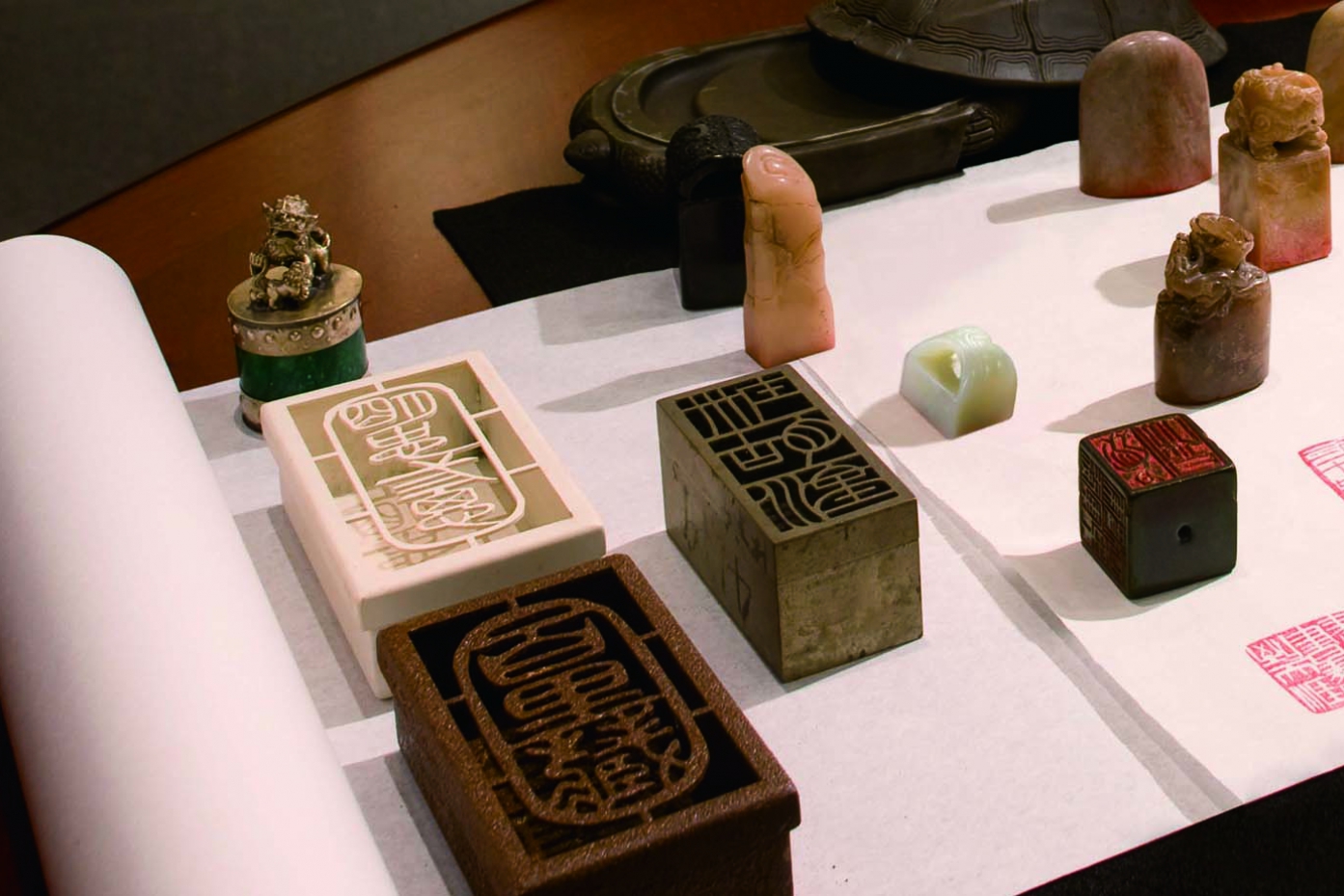 Carved railings and bricks of jade

THE CHINESE sometimes call themselves ‘descendants of the dragon’. This legendary creature symbolises power and good fortune, and its image has been depicted in Chinese arts and crafts since ancient times. The beautiful dragons featured on these pages range from the earliest known example – from the Neolithic Hongshan culture – through to a dragon depicted on an imperial robe during the Qing dynasty (1644–1911).

Chinese musical instruments have an enormously long history: bone flutes unearthed at the Jiahu archaeological site in Henan province, for example, date back more than 9,000 years.

The evolution of Chinese writing

I TYPE UP TO A THOUSAND Chinese characters every day but I’d never truly appreciated our writing system until a few years ago, when I read a book by the Swedish sinologist Cecilia Lindqvist. China: Empire of Living Symbols was based on her field research in the Yellow River Basin, investigating the ancient origins of Chinese characters.

Chinese characters are closely associated with the fine art of seal carving. A seal, or stamp, just an inch or so square, is traditionally used to produce an authentication mark or signature.

The arts of our mothers: Chinese handicrafts

I LOVE DESIGNING AND MAKING THINGS, especially things that incorporate the handicrafts traditionally associated with Chinese women. For generation after generation, mothers have passed down a rich and diverse heritage of techniques to their daughters and granddaughters. Their creativity, practical skills and generosity of spirit permeate every stitch.

It’s hard to imagine anyone not loving flowers. They’re bright and colourful, and their fragrance can gladden the heart. I’ve also noticed that people in galleries always spend a long time in front of paintings of flowers. Taipei’s Palace Museum has many beautiful examples, which provide inspiration when it comes to flower arrangement.

The festive red packets given out at Chinese New Year symbolize good fortune, so I had the idea of giving friends an extra-large version as a gift.

Designing our New Year greeting cards has been a special annual project ever since we set up our company in 1985. In 1987, we started designing cards based on the 12 animals of the Chinese zodiac. Then, after 12 years, we began incorporating 3D design elements.