Festivals and
the Traditional Chinese Calendar 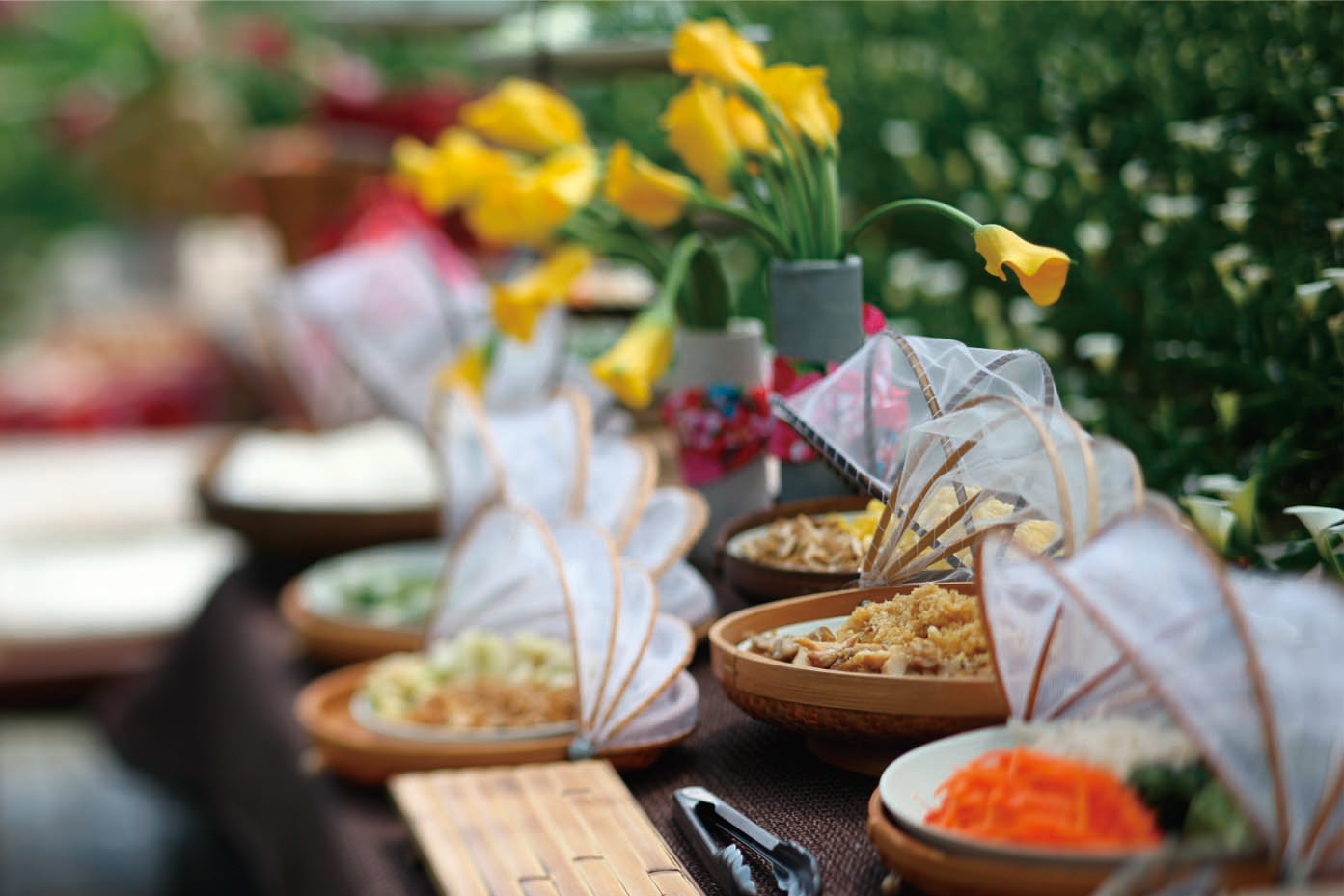 During the Lantern Festival, families traditionally eat yuan xiao and tang yuan – glutinous-rice balls that symbolise harmony and union. Yuan xiao are eaten by the northern Chinese; tang yuan are eaten in the south. (See page 86-87 for further specialities.) Both often contain a filling at their centre, but the way they are made differs. Yuan xiao are made by rolling the filling into balls, then tossing the balls in glutinous-rice flour and sugar until they’re coated in a thin layer of dough. For tang yuan, the dough is kneaded into balls. A hollow is created in the centre to insert the filling, then the edges are crimped together and the tang yuan is rolled back into a ball. Rice balls are boiled in water, then served in a soup or a syrup, or fried. A good rice ball is slightly chewy, but will not stick to your teeth.

Tomb-Sweeping Day, or Qingming, occurs between 4 and 6 April. On this day, families visit gravesites and carry out traditions of filial piety, expressing respect for their elders and ancestors.

Lumpia are soft, uncooked spring rolls filled with meat or vegetables, traditionally eaten on Tomb-Sweeping Day. Although they are consumed with great enthusiasm, the custom actually had a sad beginning.

From the earliest times, Chinese people have made offerings to both gods and ghosts. One of the ways we do this is by providing them with currency to use in the afterlife, passed on by burning symbolic paper money known as spirit money, or ghost money.

AT THE START of every year, I always place two Chinese almanacs on my bookshelves (the red book in the photo above, and the one behind it) to use whenever I need to select an auspicious day to do something important, but there’s far more to them than this. 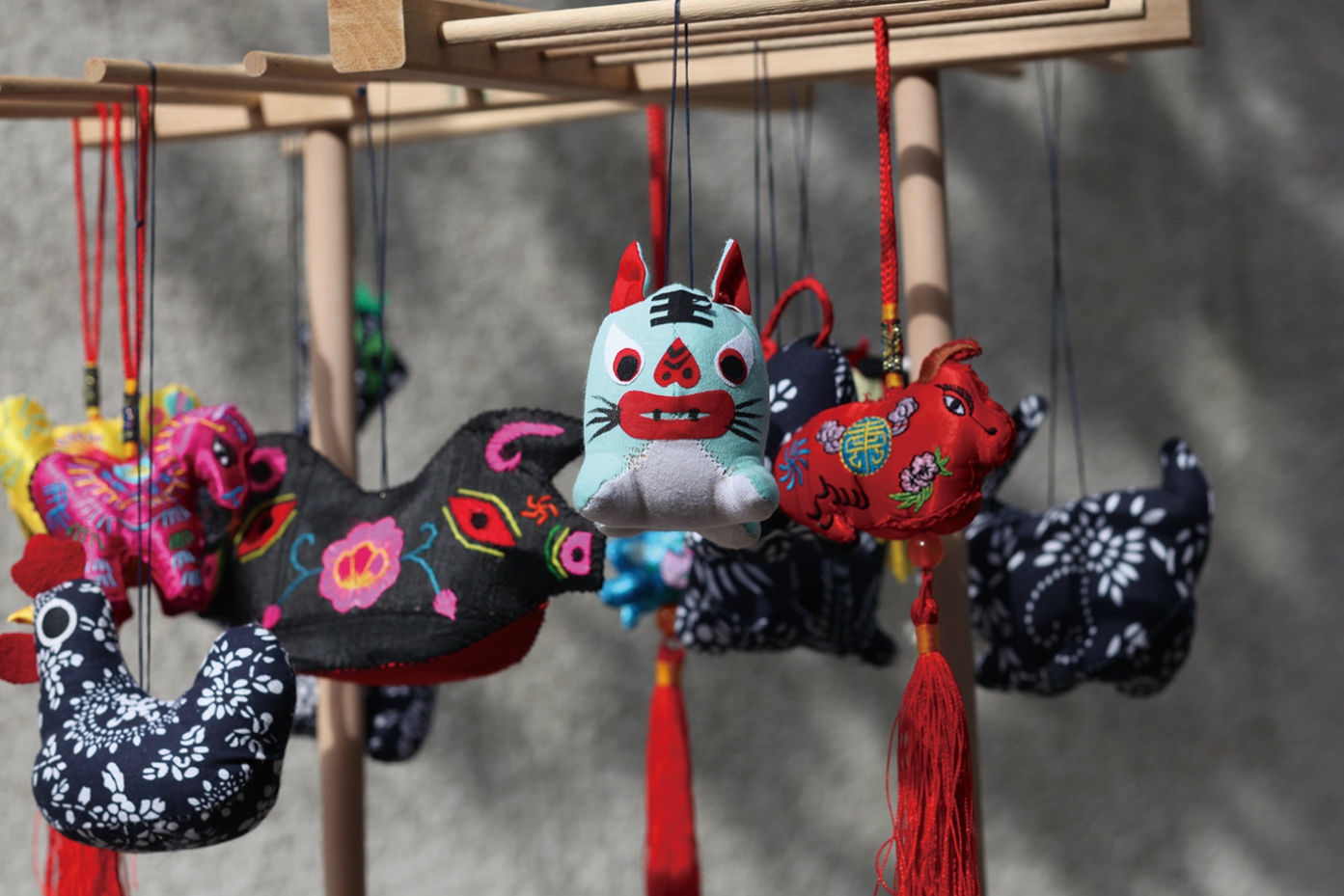 The Dragon Boat Festival takes places on the fifth day of the fifth month of the Chinese calendar (usually occurring in late May or June) – around the time of the summer solstice. It is also known as the Duanwu (‘High Noon’) Festival and the Double Five Festival.

Every Chinese family eats zongzi during the Dragon Boat Festival, so preparing these little wrapped packages is an important household task.

The Qixi Festival occurs on the seventh day of the seventh month of the Chinese calendar (hence the alternative name of Double Seventh Festival). It originated with the poignant myth of a love affair between a cowherd and a weaver girl, which is why people also call it Chinese Valentine’s Day.

Emotions inspired by the Seventh Eve

When I was young, I loved reading the novels of Chiung Yao (b. 1938). Her romantic stories were published during an era of progress and growth, and they had a huge impact on my generation, with their message that as long as there is love, any difficulty can be overcome. I have a friend who also indulged in those books, and 30 years later, she is still chasing the dream of love – endlessly disappointed by the failure to secure the ideals that were lodged in her young heart.

Before Chinese New Year, my mother always consulted the Chinese almanac (see Spring, pages 52–55) to see if any family members were in danger of offending Tai Sui before visiting the temple to pacify him on their behalf.

Throughout many centuries of China’s agricultural past, oxen – farmers’ hardworking helpers – were considered a symbol of wealth and good fortune.

The solar terms were in use as early as the Western Han dynasty (206 BCE–25 CE). Not unlike a 12-month calendar, they divide the year into 24 equal segments, providing an accurate forecast of temperature and other seasonal phenomena for each term. 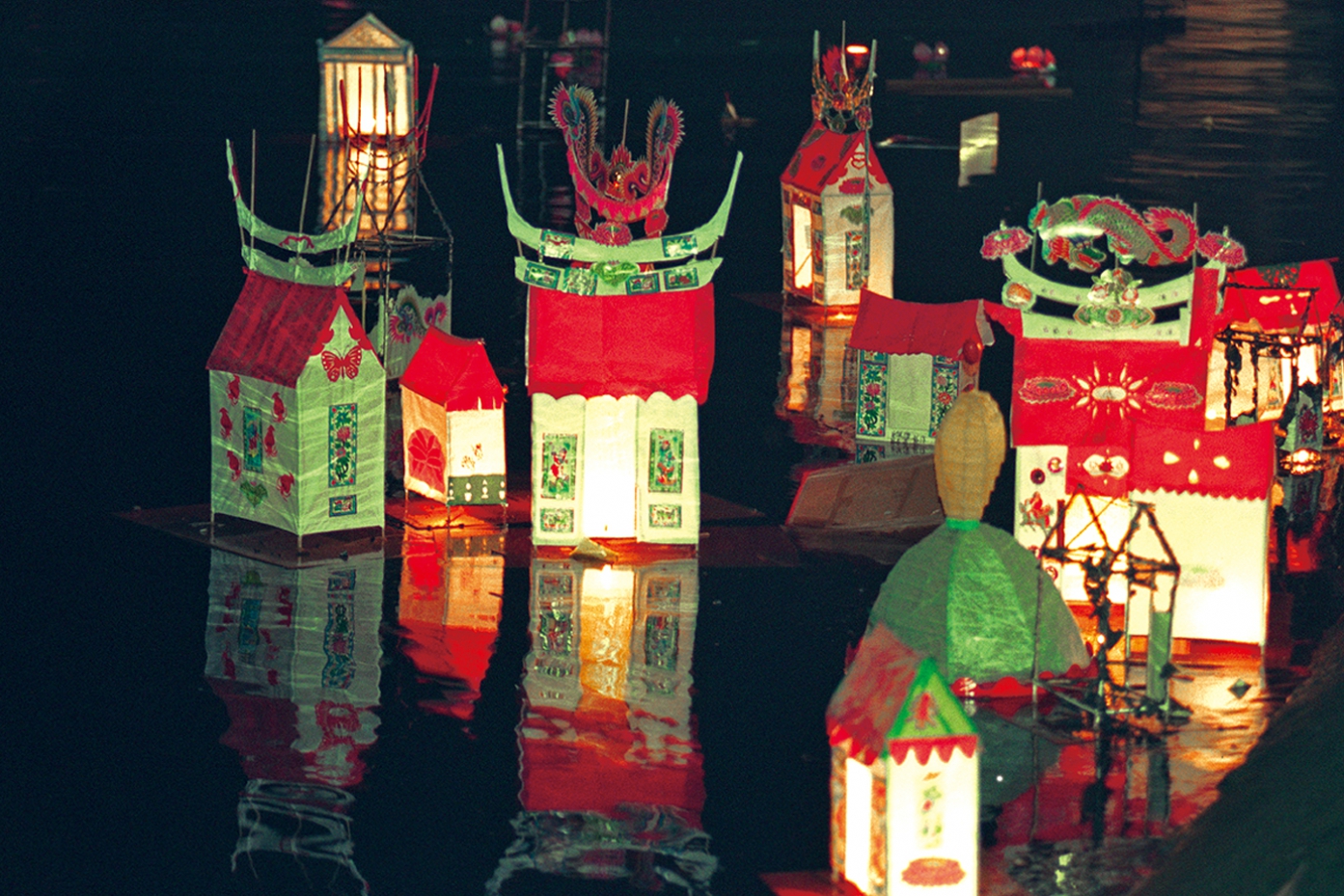 Zhongyuan, the Ghost Festival – also called the Hungry Ghost Festival – falls on the 15th of the seventh month of the Chinese calendar. The seventh month is the Ghost Month. On the first day of the month, the gates of the underworld open and lost spirits and hungry ghosts re-enter the world of the living and look for food. The gates of the underworld close again on the 30th day.

The Mid-Autumn harvest festival takes place. It falls on the 15th day of the eight lunar month, the second month of autumn. It full on a moon symbolic of family reunion – and it’s also known as the Moon Festival or the Reunion Festival.

Barbeque began long, long ago, when humans first started cooking food over a wood fire. People all around the world still barbeque food today, although techniques have improved greatly!

‘ The Moon Represents My Heart ’

You ask how much I love you
And just how deep my love is
My affection is real
And my love is true
The moon represents my heart.

The poet Su Shi described mooncakes as ‘chewable moons, crispy and sweet’. The embossed characters on the seven smaller cakes here indicate their fillings, which include date paste, pine nuts and lotus seeds, and sweetened bean paste. The white cakes have their filling indicated in red. And the large ‘celebration cake’ (see Summer, page 94) is filled with pineapple.

Pineapples have been grown in the Taiwan region for hundreds of years. In the early part of the 20th century, the pineapple-processing industry began to flourish, and tinned pineapple developed into a major export. By the 1970s, however, a fiercely competitive global market meant that the region was faced with an over-supply of these fruits; pineapple cakes were invented to take advantage of the surplus.

A person’s destiny, and how aspects of their physical appearance reflect their personality and even their fate, have both fields of study in China since ancient times. 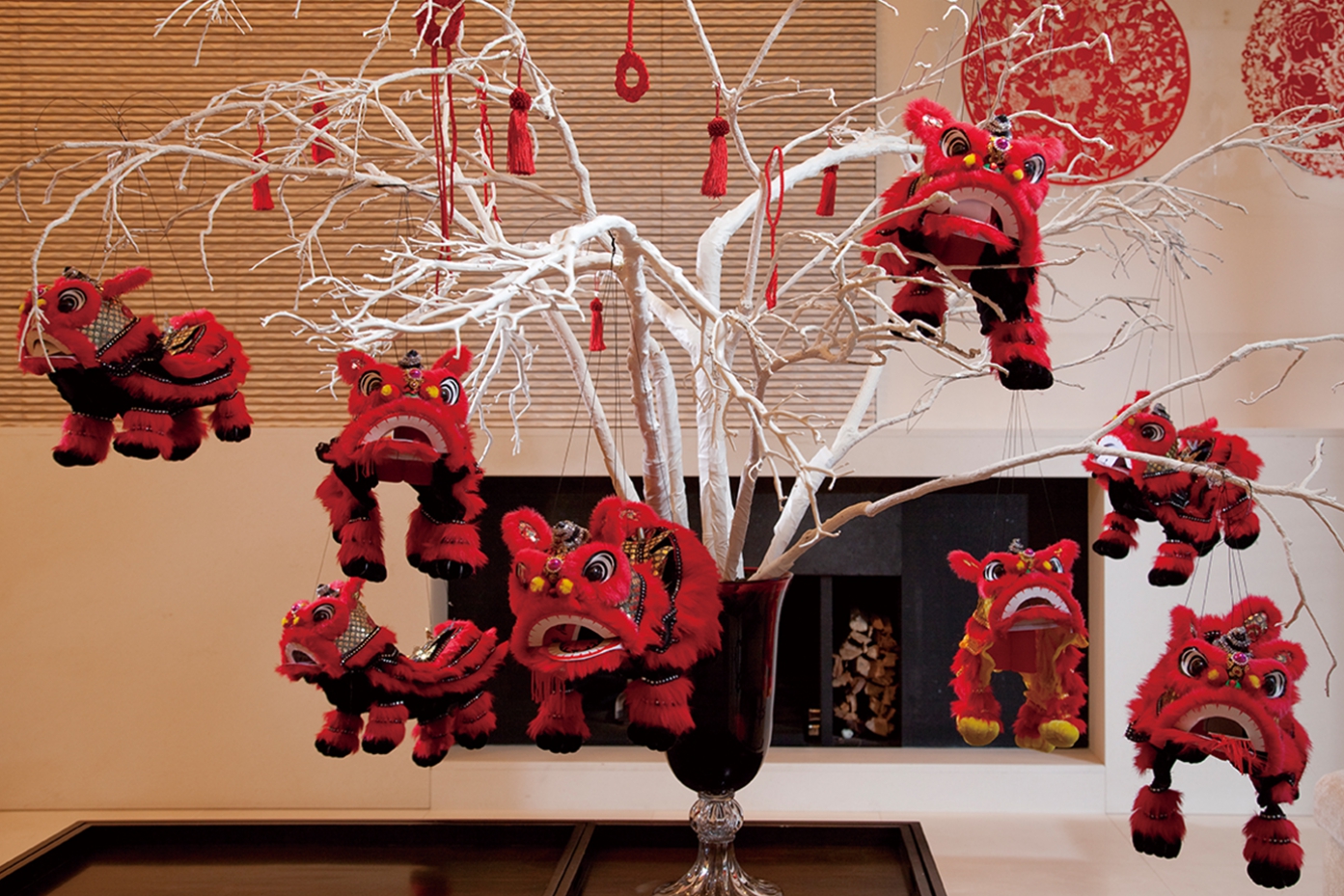 The Winter Solstice Festival usually takes place on 21 or 22 December of the Western calendar – the winter solstice, and the ‘extreme of winter’ (donghzi), which is why it is also known as the Dongzhi Festival. This midwinter festival is marked by honouring ancestors and consuming nourishing foods.

Chinese New Year is the most important and joyous festival of all for the Chinese. Starting with New Year’s Eve, on the night before the first day of the lunar year, various customs and rituals continue right up until the Lantern Festival on the fifteenth day of that year. The Chinese New Year marks the end of winter and the start of spring, which is why it is often also called the Spring Festival.

The art of the couplet

When I was a child, walking through the alleyways after New Year, I’d see couplets written on red paper pasted by the doors of every house, but I didn’t understand their meaning. I just thought that they looked desolate: mottled from the rain and faded by the sun.

One year, my daughter Joyce was home for the holidays, but she had to return to university in the US before the end of the year, so we decided to stage an early New Year family reunion dinner. It was a lively occasion, including three generations of the Yao family and the Ren family (on my side), and an American friend of Joyce’s from university – 21 people in all. It was the first time that both sides of the family had ever attended the same New Year dinner.

Buddha Jumps Over the Wall

Buddha Jumps Over the Wall soup is said to be so delicious that it could tempt a vegetarian monk – or even Buddha – to jump over a wall to sample it! The method I use takes more than five days, but with the first spoonful, you understand why it’s worth taking the trouble.

Numerous cakes are associated with Chinese New Year. Although they vary greatly in form and taste from region to region, the main ingredient is always rice (ground into flour, or made into milk), which is mixed with sweet or savoury flavours before being steamed.

Mahjong, a game for four, is one of the three quintessential Chinese games, along with Chinese chess and Go. Mahjong is enjoyed among friends and families at New Year, and it’s gradually becoming more popular around the world.

Chinese chess, or xiangqi, is the most widely played of China’s chess-style games. The origins of the modern game are generally traced back to the Northern and Southern dynasties, when Emperor Wu of the Northern Zhou dynasty wrote the Xiang Jing (‘Xiang Classic’; 569 CE) and expounded on an earlier incarnation of the game, called xiangxi.

Go, or weiqi, is the world’s oldest board game. It is an inexhaustible and ingenious game of strategy that’s also very much an art. Historically, playing weiqi was considered one of the ‘four arts’, or accomplishments, required of members of the literati, together with music (playing the guqin), calligraphy and painting.

The 12 signs of the zodiac

Each year on the Chinese calendar is associated with one of 12 zodiac signs, so a person’s sign is determined by the year in which they are born. The sequence of the 12 are: rat, ox, tiger, rabbit, dragon, snake, horse, goat, monkey, rooster, dog and pig.

The Chinese almanac and incompatible foods

In ancient times, when the spread of information was very limited, the Chinese almanac (see Spring, pages 52–55) was a very effective means of disseminating and passing on practical life experience.