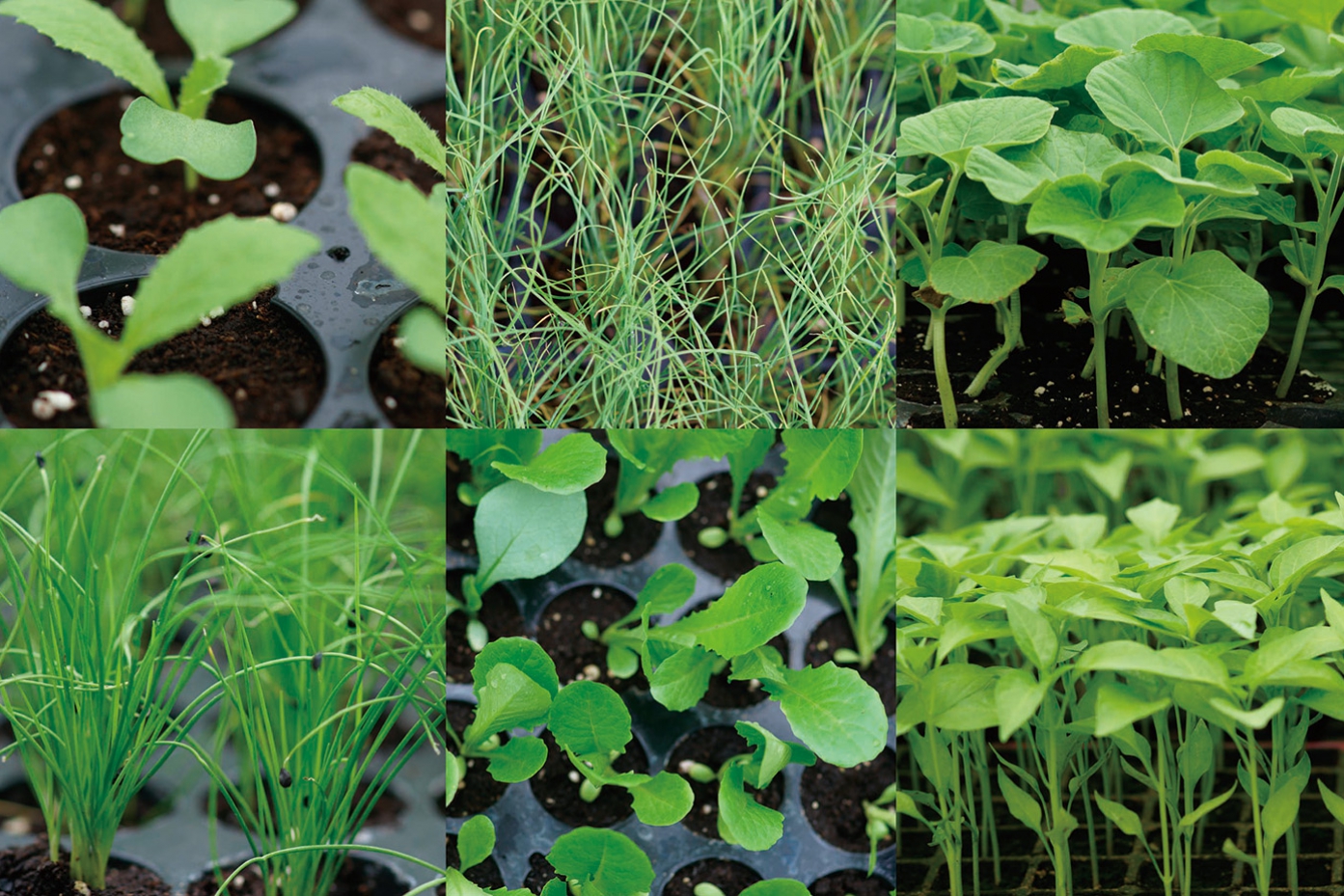 My vegetable garden in spring

The taste of home

When my children were young, we sent them to summer camp in the United States. The camps, in rural Maine and Pennsylvania, lasted for six weeks, and since they were so far from home, I accompanied the children there every year staying at guest houses.

1 Braised dishes The most important ingredient when preparing braised dishes is soy sauce. To this base, you can then add a range of different ingredients, including rice wine, spring onions, ginger, star anise, Sichuan pepper, salt, sesame oil and sugar, depending on the dish.

Some years ago, I set up a book club with a group of female friends. We met every three months, taking turns deciding what to read, where to meet, and what to eat and drink. One spring I was in charge. I selected a memoir called The Diving Bell and the Butterfly, by Jean-Dominique Bauby, the former editor-in-chief of French Elle. Bauby had suffered a stroke when he was 44 years old, become totally paralysed, apart from his head. His book was painstakingly recorded by an assistant, with Bauby ‘dictating’ his words from his hospital bed by blinking ‘yes’ to suggested letters, one at a time. It was completed just before his death. I have always been touched by this story of a soul who breaks free of the shackles of paralysis to dance like a butterfly.

According to traditional Chinese medicine (TCM), the blockage of blood and qi (life force) in the body leads to numerous ailments. While Western medicine usually prescribes painkillers – a temporary solution that can cause stomach, liver and kidney damage – many Chinese people prefer to rely on traditional therapies. 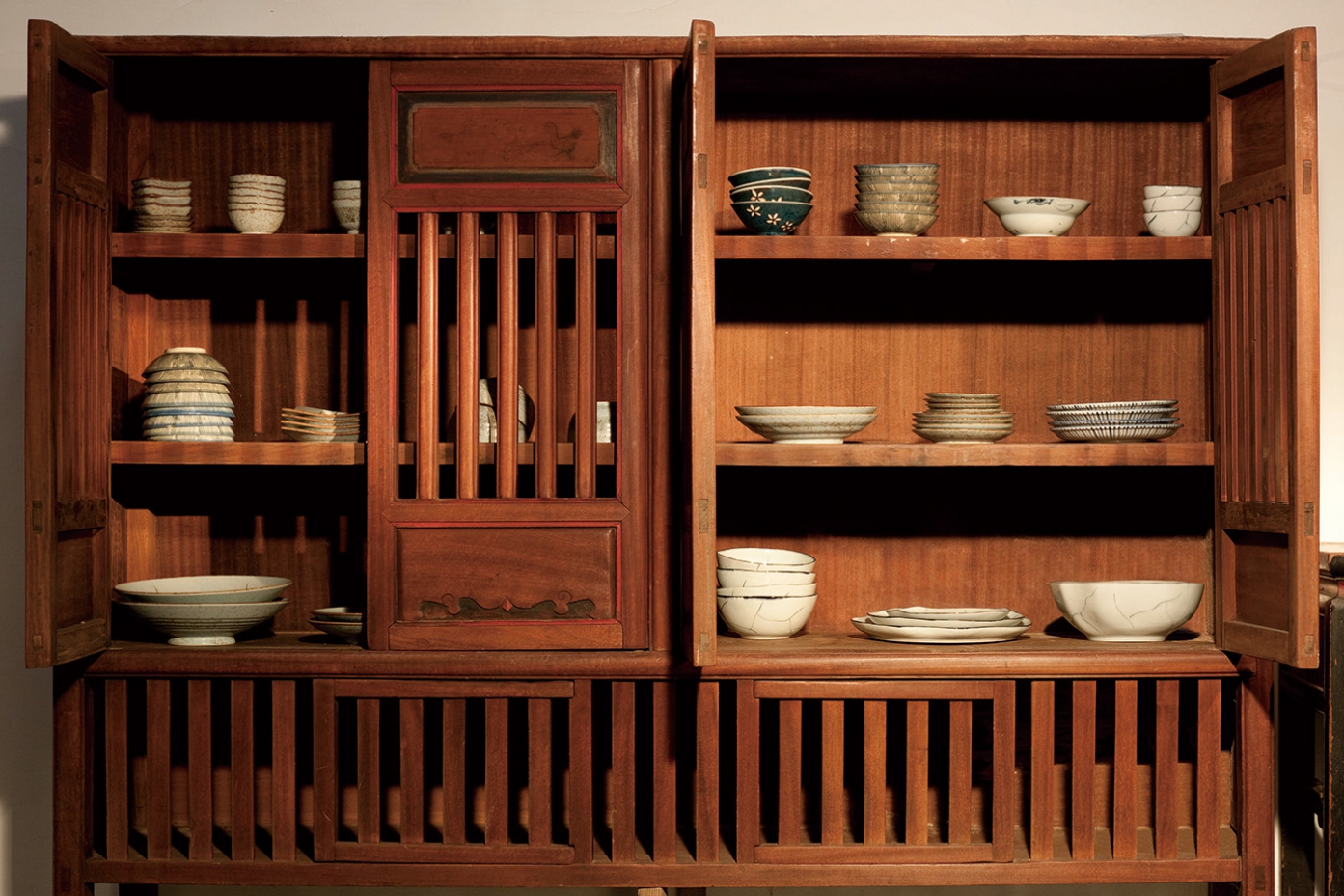 My vegetable garden in summer

Mr Tang and I have been neighbours for 30 years. He never buys vegetables, because he grows his own. I once asked him what he eats if nothing grows. He responded: ‘I have a stockpile of preserved and frozen vegetables. We all need to have a rest, right? Well, so does the land!’

Herbs, spices and other dried goods

Gan Suihui, the owner of a famous Hong Kong restaurant called Yung Kee, once explained that when he was an apprentice chef, his teacher had never shared his most important kitchen skills, fearing his students would surpass their master. So Gan Suihui stole them!

According to the ancient medical classic the Huangdi Neijing (Yellow Emperor’s Classic of Internal Medicine), ‘Sages always take precautions against diseases’. Sages, in this case, are those who maintain good health by following the principles of traditional Chinese medicine and eating a balanced diet.

The importance of communication

A harmonious family life depends on good communication, so this is something that I have always taken very seriously. Making time to talk regularly strengthens family bonds and resolves misunderstandings. 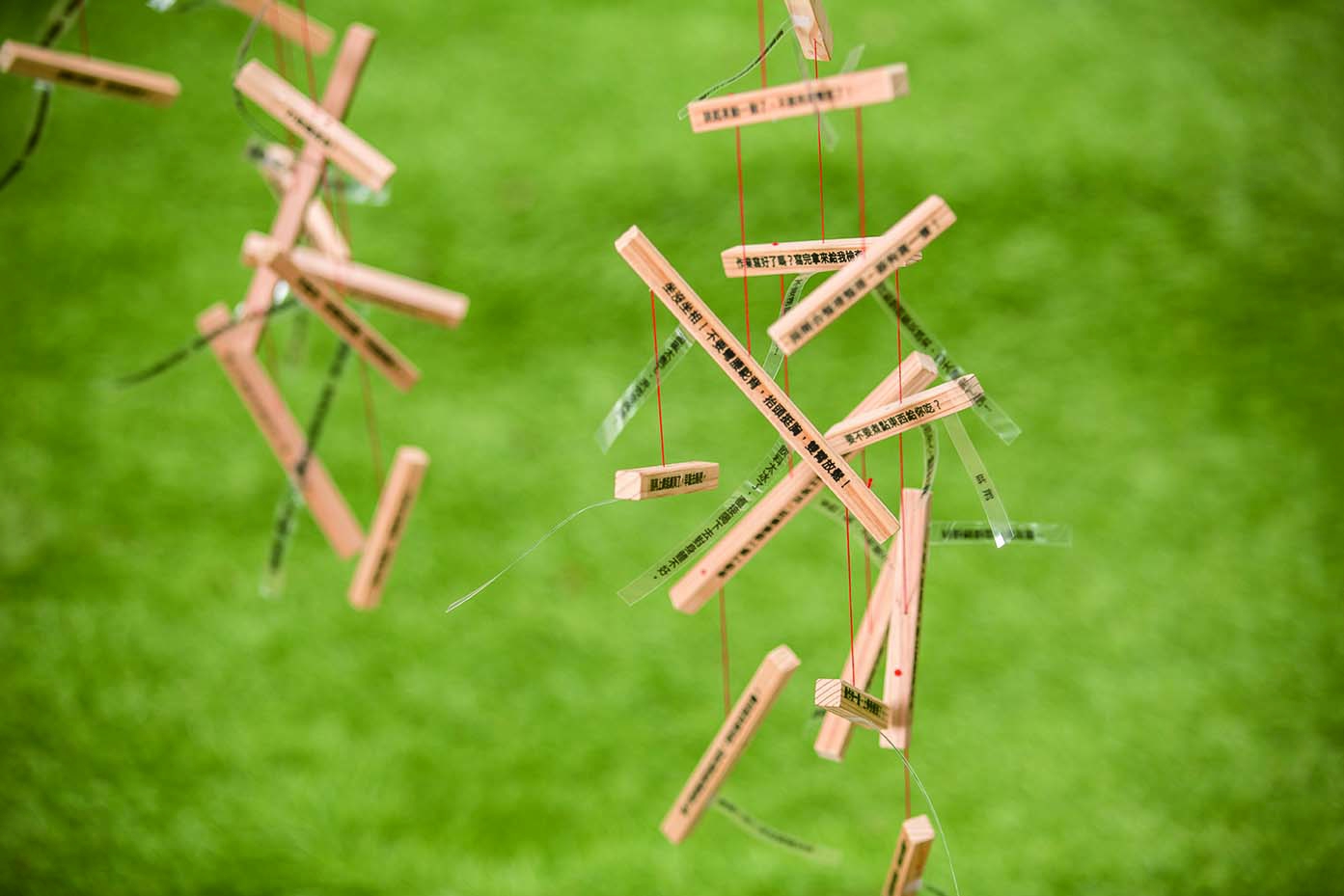 My vegetable garden in autumn

Every weekend, the Jianguo Holiday Flower and Jade Market takes place in an extended car-parking area under the Jianguo South Road flyover in Taipei. It’s a wonderful weekend destination that’s always crowded. The Flower Market stallholders sell all kinds of plants, flowers, equipment and knick-knacks. Some give talks and demonstrations of special techniques, and there’s lots of cheerful banter.

Many different sauces are used in Chinese cooking, but soy sauce is absolutely indispensible. In fact, the Chinese traditionally consider it one of the seven necessities for daily life, along with firewood (for cooking), rice, oil, salt, vinegar and tea.

Wine left for 21 days will turn into vinegar. Historians think vinegar was already being made in China at least 2,400 years ago, and the methods for making it that were recorded in the Qimin Yaoshu – an ancient agricultural text completed sometime between 533 and 544, during the Northern Wei dynasty – are still used to this day (see pages 224–25).

Soy sauce is a fermented product, with its main ingredient being soybeans. Soybeans are native to East Asia, and records confirm that they were domesticated in China centuries ago. They were picked before fully ripe, and eaten from steamed or boiled pods.

In a paper shop in Berkeley, California, I saw a paper crab by the designer Aimee Baldwin, and thought it would make a perfect place-setting decoration for a crab feast.

In traditional Chinese culture, the birth of a baby is an important event that’s followed up with several rituals to welcome the new child into the world. A significant custom is that the mother is traditionally confined to the home for 30 days after bringing her baby into the world – some women extend this to 40 days, or even 100 days.

Traditional Chinese medicine (TCM) has provided great benefits to the Chinese since ancient times. Although I take advantage of Western medicine, numerous experiences have shown me that it’s also wise to consult a TCM practioner.

I mentioned to my children one day that their grandfather had once suggested that I undertake an MBA in home economics. ‘What!’, they said. ‘Is there even such a thing? Why would you go to school for that?’

As a child grows up, its parents will find their love bound up with many decisions, worries and fears. Sometimes it can be hard to achieve peace of mind, and this unique blend of joy and sorrow can be hard for a child to understand. So I designed a wind chime as a metaphor for this strange contradiction. When the wind blows, the sound of wooden strips knocking together is soft yet constant, like our endless nagging. And once in a while the red threads get tangled, just like feelings do. I hoped that when children heard the knocking of the chimes, they might recognise the good intentions behind the nagging 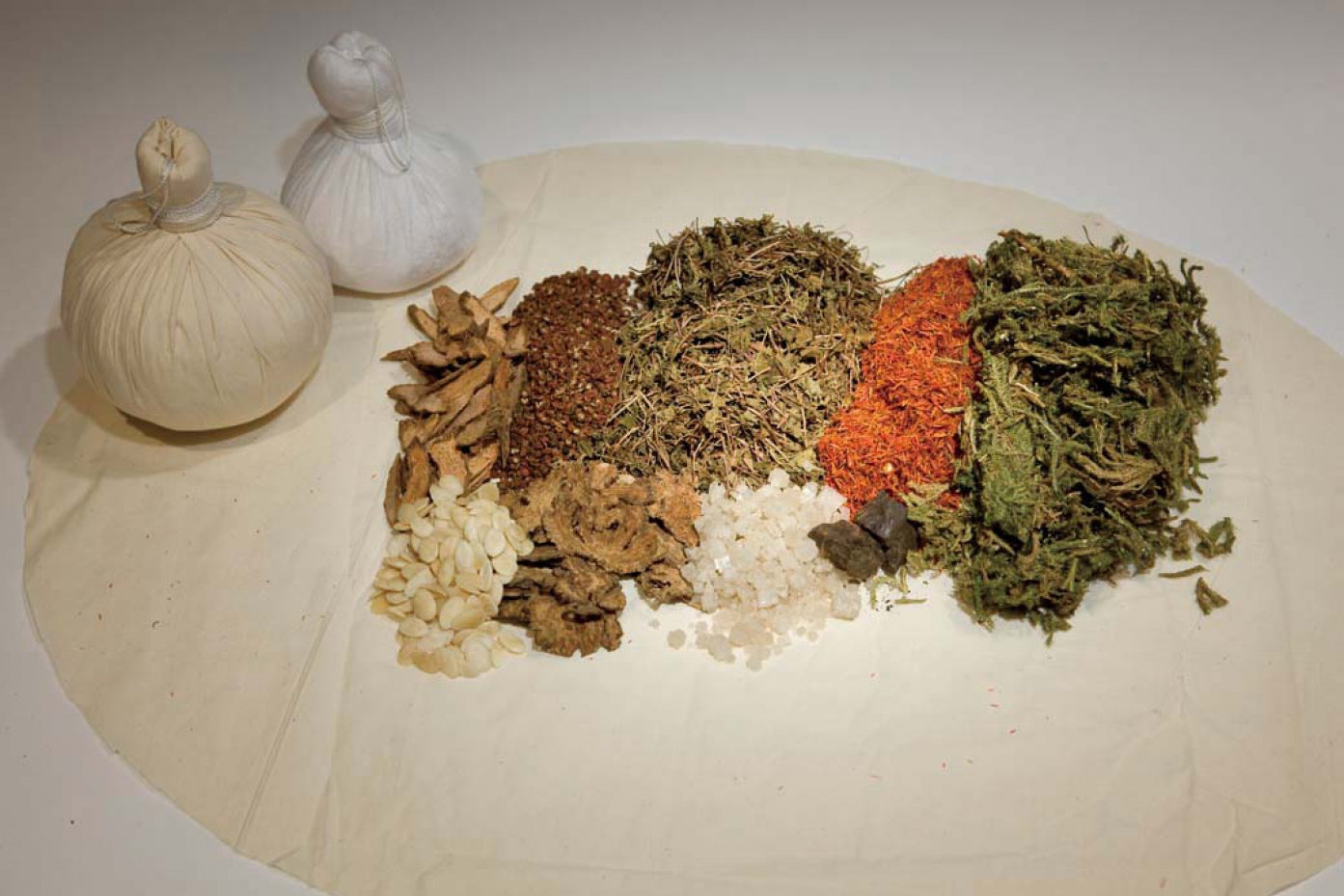 My vegetable garden in winter

I nurtured my dream of a ‘Castle in the Sky’ wine-crate vegetable garden (see Spring, pages 221–24) from spring through to winter, slowly bringing it to life.

The full title of Zaoshen, the Kitchen God – also known as the Stove God – is Spirit Lord Who Determines Blessings, Primordial King of the Nine Spirits, Ruler of Fate Dwelling in the Eastern Kitchen!

Immersing yourself in warm water is a wonderful way to relieve aches and pains. There are many famous baths, such as the Huaqing Pool where the Tang-dynasty concubine Yang bathed, and the Roman Baths: their hot waters from underground help improve circulation.

My interest in TCM meridian theory began with the Chinese martial arts stories that I used to read when I was young.

The qi that circulates in the human body flows through the 12 main meridians in a set sequence each day. The flow of qi in the different meridians during each of the 12 traditional two-hour periods of the day is called Zi Wu Liu Zhu (Midnight-Noon Ebb-Flow).

Chinese philosophy considers that all things and all phenomena in the universe – large and small – belong to one of five categories, Wuxing, based on their nature and characteristics. These are commonly called the Five Elements – metal, wood, water, fire and earth.

Tai chi is a very popular form of exercise that’s a highly effective way of improving your balance, co-ordination and general wellbeing. You don’t need any special equipment, and it’s easy to learn, though hard to master.

Learning at school and at home

Children all have their own temperaments, and for the most well-rounded upbringing, the lessons they learn at school and at home should complement each other.